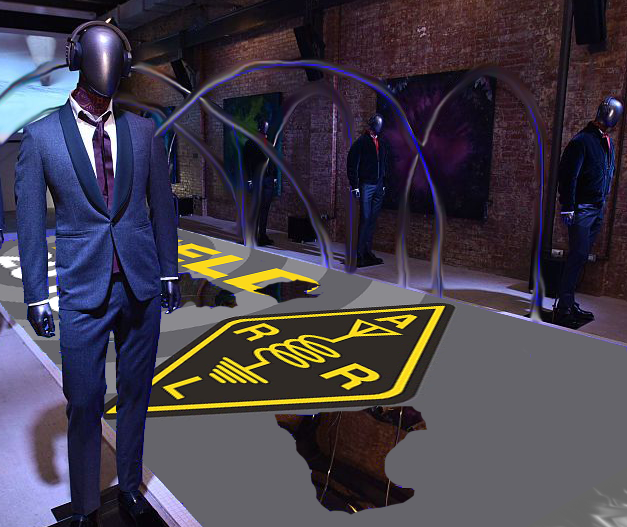 Given the precarious nature of conditions in ourselves and the world, we never know when the current song is our swansong. Nonetheless we forge ahead, looking for interesting moments of personal discovery. In ham radio everyone is good at something and all the people I know in it are much more qualified in the many subspecialties than myself. One thing I like to do is listen. My wife might dispute this, understanding though she is.

Last year I attempted to monitor our Field Day 2018 communications using a Software Defined Radio that was deployed on site. My hope was that by visualizing ham band traffic, we could make more contacts. Making more contacts is the principal figure of merit for Field Day performance. There is no particular depth of relationship between transcontinental operators. Let me momentarily illustrate the situation. The conversation typically goes like this:

This terse back and forth is usually the minimum necessary for a two-way contact to be logged and recorded. Because of the pure noise and vagaries of analog single sideband transmission, it usually takes several attempts for each party to provide their callsign, section and class for the logs, data now collected with "logging software". But it remains a century-old fascination that we can communicate over long distances without wires.

Let me amplify one point. In amateur radio Field Day activity is effectively zero relationship. There is no, "Are you okay?" or "How are you doing?" There is no, "Hey, what's the weather where you are?". No, this is the purely distilled state information has been completely sterilized from the contamination of social information. Contrast this with present day social media, which is nothing but personal information, and sometimes a bit too much of it!  Field Day is about Scalps without Faces. It is a Trophy Hunt for Hits, a Safari for Signs, a Contest where only the number of contacts matters, not what content was exchanged. The tacit contract is, "Well we could have done that if we wanted to, the radios, after all, are working! It is an Olympic effort where only numbers matter. As such there is a strange emptiness in the midst of all the chatter, like the weather itself.

Compensating for this angst are the coterie of operators who sit in a circle, away from their radios, eating, drinking and rag chewing about the news of the day, perhaps talking about rigs, antennas and the technology of radio. It is in these local circles that the deepest relationships are built. 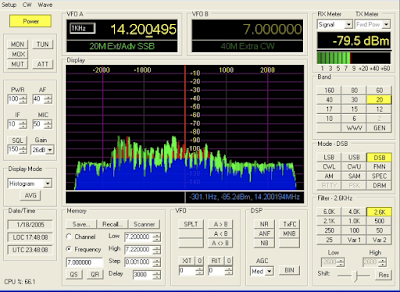 There are two well-known strategies in Field Day communications. In the first, an operator sits on a frequency and lets people come to them. This is called, "Running". In the second the operator searches the bands for new contacts in a strategy called "Search and Pounce".

In prior times, this search for contacts was entirely "by ear". The operator would slowly scan a frequency band looking for people who happen to be transmitting at that moment AND who were also unoccupied. If they were busy in a conversation, a waiting line of those ready to pounce would form, adding to the cacophony of noise.

The advent of Software Defined Radio is changing this hit and miss style of brute force search into a more deterministic process, at least, that is my current working belief.

The waterfall displays of SDR (shown above) enables us, at a glance, to observe all the traffic that is in play, "by eye". We can then select potential contacts using criteria such as signal strength and operator consistency. But for operators who have spent years training their ears, change can be hard!

Besides showing all available traffic instantaneously, waterfall displays show how busy the band is, and also how good signal propagation conditions are. These conditions can vary significantly over the course of the day, and over longer time frames due to solar effects on the ionosphere which has its own "weather".


A New Approach Based on WebSDR

In an attempt to overcome these limitations a different approach was taken this year. This attempt was greatly facilitated by Tim Lee and John Nordlund. Tim is a Marlboro man of amateur radio appearing at the most helpful of moments. John is an encyclopedia of radio and electronics knowledge, which is dispensed on demand to those like me who were under the mistaken belief that they already knew something. Most of the time some unanticipated nuance is learned.  I had initially planned on running the SDR from my home, and remotely monitoring the signal landscape using an internet link. But Tim and John had suggested I could use WebSDR which would enable me to monitor our signals from several geographically distributed locations. It took me awhile to parse their suggestion into a form I could use, but this approach proved most effective and possibly revolutionary. Further, it has significant headroom for future improvement. It could change amateur radio.

Using WebSDR as the fulcrum for this year's experiment I established five concurrent sessions with Software Defined Radios in:


The open source WebSDR software can be set up by anyone using inexpensive hardware and a web server. It can also be customized for specific locations and radio configurations. Here is a typical installation operating on the 40-meter band: 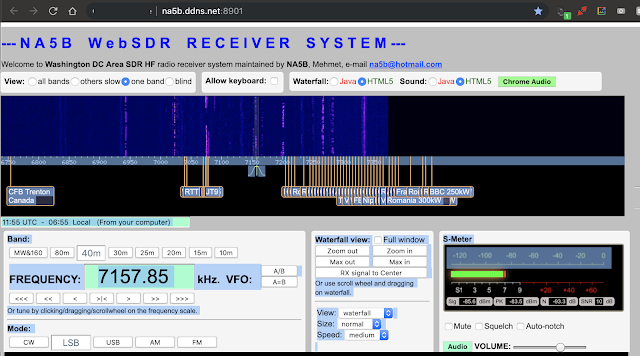 During the course of operations, it was easy to tell if we were heard at the remote locations, and whether operators at those locations were audible by us. This moment of determination resulted in a weird cognitive experience that I can only describe as a sense of teleportation, similar to that which has been described in binaural radios. I could experience the activity of two operators at two locations simultaneously in a peculiar form of binocular vision/audition that is easier and more spectacular to experience than explain. Tweaking the remote vs. local experience is a bit of art I have only begun to explore. It is like being two different people at the same instant, in two different places, hearing two other people and their respective renderings in the fog of noise and single sideband. One distinctly interesting aspect of this experience is that one can recognize a familiar voice even if it has been distorted in tone, timber and frequency. This distortion comes from the signal being encoded, transmitted and decoded by an analog system. The simultaneity of this creates a peculiar cognitive dissonance, the source of the deja vu feelings of teleportation suggested previously.

Let me describe the hardware of this experience. While I, the teloportee, am observing the visual signals of the conversation on the SDR waterfall display, I am wearing headphones with one ear up, like a Cessna pilot who is monitoring an aviation radio simultaneously with conversations in the aircraft. So, in one ear I am hearing our local operator locally, and in the other ear I am hearing them remotely. Then, in complement I hear the remote operator locally on the local operators rig and the remote operator remotely on the software defined radio. All this while tuned to their 3 kHz wide chunk of radio frequency. This whole sonic and visual arrangement pivots back and forth where local and remote conversation halves are experienced from both the local and remote points of view simultaneously!

For our work this weekend, I was surprised by the low-latency of the communication. Conversations quite nearly matched in time, but not in tone, timbre and frequency. It was interesting that despite the aural distortion, you could recognize a familiar operator. The low-latency was especially surprising given the hack job of an internet connection I had cobbled together on short notice. Our ham club facilitator Dick Wallace made efforts to gain a proper wireless connection to a neighboring agency who was sponsoring the event. But due to various (and perfectly reasonable!) security restrictions, no wireless internet connections were available.

The search however did allow us the benefit of a half-hour of undeserved air-conditioning on a hot and muggy Arkansas day. In desperation I finally set up my iPhone as a personal hotspot, using Cellular Data to accomplish the web connection. This web connection enabled the five concurrent SDR sessions with few if any drop-outs of audio or waterfall display. As the afternoon turned to night, I imagined that I would return home to an unhappy wife holding a cell phone data bill of gargantuan proportions. Instead I was pleasantly surprised to find out that after all this DXing and teleportation I was still within the confines of my data plan allowance. My wife is very understanding of my experimentation and I would be remiss in not saying so.

In summary, this year's approach of multiple, remote SDR's accessed via a web link solved and eliminated the three of the four limitations encountered in the previous year's exploration.

It partially reduced the fourth limitation as well.

This problem was solved to the point of nearly eliminating the fourth limitation by collocating the SDR fishfinder op and the SSB operator (several) at the same table with our respective hardware. This eliminated the need for 2-meter coordination chatter on the handheld radios and allowed for the simultaneity of the audio that produced the teleportation experience. This also solved the see versus hear problem.

There is more potential for automation of SDR enhanced signal spotting, also known as let the machine log the big numbers.   We might want to consider a local WebSDR installation.

There were many contributions made by others that made this Field Day 2019 a success. One that affected me personally was that Roger Fidler provided fabric floors for the tents that provided excellent insect abatement, specifically chiggers. The Carolina Windom antenna was spectacular in the way it was deployed with a portable mast and a flagpole. Roger provided hydration that prevented heat stroke and Tim Lee provided pizza that prevented collapse.

At one point we had a telecommunications wonderland in play. We had the operators and their operations on 7 and 14 Megahertz bands (40 and 20 meters). We had handhelds at 146 Megahertz (2 meters) for tent-to-tent SDR-spotting communication. We had at 2 and 4 Gigahertz bands (15 and 7.5 centimeters) running the internet wireless part of the operation. All these were running simultaneously to accomplish our first signal spotting of this year.

These comments reflect the experiences, viewpoints and opinions of the author only and not necessarily those of any agency or individual connected with the event. They are offered without warranty of merchantability or fitness for any purpose expressed or implied.
Posted by Van at 7:45 AM No comments: Links to this post